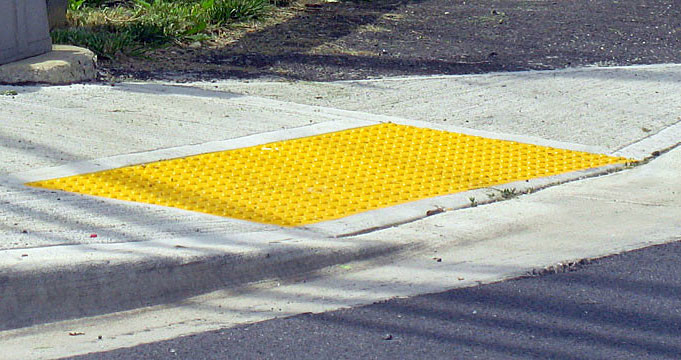 ADA REGULATIONS IN THE CONSTRUCTION INDUSTRY: ABOUT TRUNCATED DOMES

What are truncated domes?

Most of the truncated domes are in the form of yellow bumps on sidewalk so that they are conspicuous enough to be detected with a walking cane and underfoot. Again they should not be so intrusive that they cause mobility problems for other users. ADA has some stipulations on the height, width, and length of truncated domes.

Where should they be used?

Initially, the curb ramps were meant to increase accessibility for individuals in wheelchairs and other mobility aids. However, that eliminated the visual cue created by the sidewalk. So truncated domes are a solution as they make both a tactile and visual warning that there is a change of elevation on a specific area.

Do they have to be yellow?

Many people have only encountered yellow truncated domes. However, they don’t necessarily have to be. ADA requires the detectable warning surfaces to visually contrast either light-on-dark or dark-on-light with adjacent walking surfaces. It is only that yellow is the most popular color used in truncated domes.

But it is crucial to keep in mind that some states have additional stipulations on the color of the detectable warning surface. For instance, in California, only yellow truncated domes should be installed in all public properties unless the color of the surface itself is yellow.

Many manufacturers like yellow truncated dome mats because they contrast nicely with paving materials. Also, yellow is primarily used in hazardous warning systems in traffic and other situations; therefore, it is associated with caution. Red also serves the same purpose, so it is not abnormal to find red-colored truncated domes. Since truncated domes can be removable, it makes it easy for businesses to swap colors depending on their needs.

Truncated domes are a courtesy and a structural regulation by federal law. Failure to comply with ADA regulations in your business could leave you with a potentially costly lawsuit and heavy fines.

How Does Social Media Affect The Divorce Process?

5 Reasons Why Wearing Work Uniforms Is A Good Idea